A home for actors, singers, dancers, designers and creatives 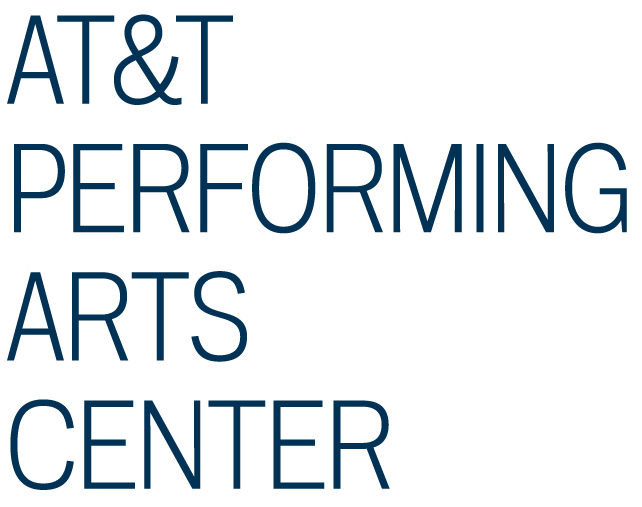 The AT&T Performing Arts Center was challenged with collecting paper applications and needed a solution to streamline the intake and processing of data, while presenting a professional and polished look.

Apply streamlined the application and review for applicants and administrators, making the process easier to understand, faster to complete, and more straightforward to manage.

We already have more applications than we did last year, and that’s because we’ve moved our application process online.

In October 2009, the long-anticipated completion of the Dallas Arts District was marked with the grand opening of the nonprofit organization AT&T Performing Arts Center, a project that was first envisioned over 30 years ago.

In the late 1970s, visionary Dallas leaders foresaw the growing need for new cultural facilities in Dallas and began planning what is now a full district of arts resources.

Placed neatly among several world-class museums, the AT&T Performing Art Center spreads across 10 acres of the downtown Dallas Arts District, and is visited by over 400,000 patrons annually.

The Center provides a public gathering place that strengthens the community and fosters creativity through the presentation of performing arts and arts education programs. The Center is dedicated to annual programming and activities that drive public education, artist development, and exclusive performance opportunities across Dallas.

In the city of Dallas, arts and arts education is woven into the community and culture itself, making facilities like the AT&T Performing Arts Center crucial to the development and growth of the community. 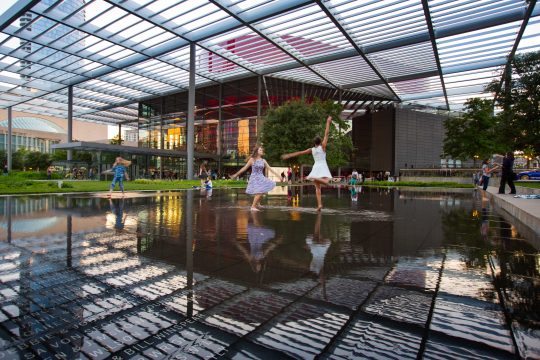 A city for creatives

Rich with passionate, creative and energetic community members, the Dallas Arts District is comprised of 13 arts facilities and organizations spread across 68 acres of land that allow local residents and visitors from all over the world to experience quality art in all forms.

Among the passionate arts advocates of Dallas is Hector Garcia, Manager of Strategic Services at the AT&T Performing Arts Center.

“I’ve been a professional actor for a long time. I’m unionized and sit on the National Board of Directors of SAG-AFTRA, the national union for film, TV, broadcast and all types of media except stage,” Hector mentions. “Separately, I’m also a member of the stage union.”

Achieving various roles at the Center over the years, and as an arts enthusiast himself, Hector understands the need for a stronger and more connected arts community across the city, and recognized how the Center could help smaller organizations flourish.

“The AT&T Performing Arts Center entered into a relationship with the City of Dallas to provide services to small and mid-sized arts organizations in the city,” Hector explains.

“These organizations have a hard time getting their work seen and their voices heard because they’re ‘mom and pop’ shops managed by passionate people who are trying to make a living by doing something they love.”

Though the Dallas Arts District is home to a handful of larger performance venues and arts organizations, much of the local charm and spirit is made up of small arts organizations that are working in underserved, historically marginalized communities.

These organizations strive to bring the joy and culture of the arts to places that don’t have a strong arts community, and foster programming that is welcoming to the public. Supported by both the broader community and other organizations in the District, these small businesses and nonprofits make a huge difference.

At the Center, we’re all about inspiring the community, bringing in diverse viewpoints, making people of different socioeconomic groups feel comfortable, and opening that door to the beauty, majesty and power of the arts. 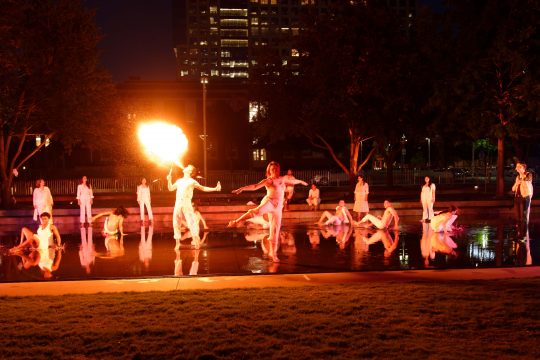 To support local artists and arts organizations in Dallas, the AT&T Performing Arts Center offers a number of programs that creatives can take advantage of.

“There are two major programs at the AT&T Performing Arts Center that help individuals and small arts organizations: the Elevator Project and the Moody Fund for the Arts,” Hector explains.

Through a generous endowment from the Moody Foundation, the Moody Fund for the Arts Program was created to reward new energy, fresh ideas, creative risk-takers, and artistic entrepreneurs with grant funding that helps get projects off the ground and move the needle in the diverse, cultural community of Dallas. 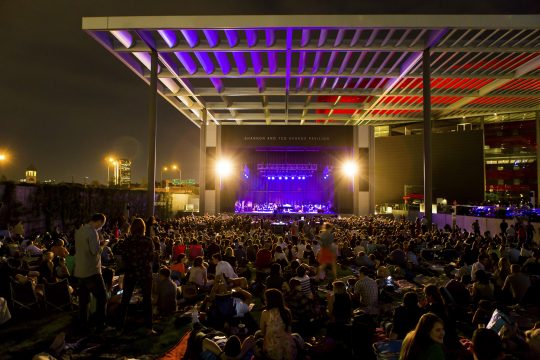 With the development of the Elevator Project two years prior to the Moody Fund for the Arts, the Center began focusing on collecting applications from local artists and groups. The process started with a paper application sent directly to the Center.

“When we first started the Elevator Project, applications were flooding in through email and handwritten or snail mail. I had to read people’s handwriting and try to decipher what they had sent, only to put it all into one working document,” Hector explains.

“We had to manually create an Excel file with the organization’s name, their contact information, what their project was, and what they were trying to do. In that first year, we got through it, but I kept thinking there’s got to be a better way because it was a huge pain in the neck!”

After the first application and review round was complete, Hector spoke with his IT Manager, hoping to try something new that would reduce the manual labor of processing applications on paper and spreadsheets. Collectively, they decided to use a survey tool to collect initial applications and materials.

“It worked better for the application process but when we moved onto the review process, I still had to create online folders in Dropbox to share the applications because others didn’t have access to the survey. In one case I even had to print out a thick binder of applications and drive it 30 miles to  a reviewer’s house!” Hector exclaims.

“We quickly realized that as a first-year project, Moody Fund for the Arts would be well advertised and we would have to be very transparent. I wanted to make it as easy as possible for everyone; for applicants and for me. Even for the reviewers and the board,” Hector explains. 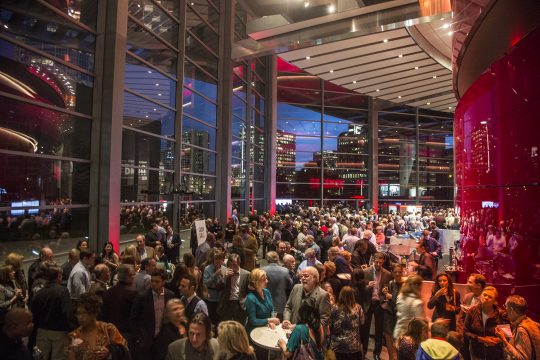 Hector decided it was time to sit down to do some homework; with a list of over 100 software tools from his IT Manager, it was important for him to consider each carefully, with a strong focus on the mission of the Center and its programs in mind.

“Out of the list my IT Manager gave me, I reduced it to about three or four choices. I landed on SurveyMonkey Apply because the capacity it was offering fit my needs and I was already familiar with the SurveyMonkey interface. The price was also really attractive,” Hector says. 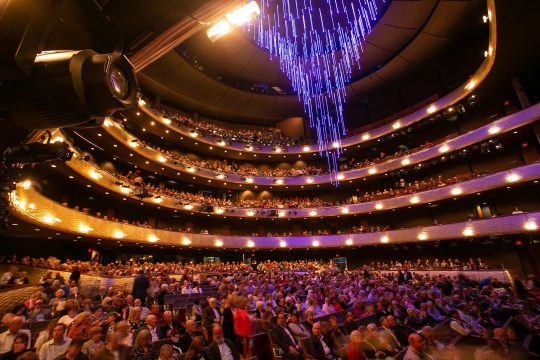 Celebrating a journey of growth and achievement

Over the course of one year, Hector was able to move both programs online with SurveyMonkey Apply and reduce support requests, processing time, and confusion across the board.

“Last year there was a lot of confusion and a lot of questions about how to apply. This year when we had our community feedback meetings, we had so few questions we were shocked! I booked the meeting for 2 hours and I was out of there in an hour, because everything went smoothly now that we have SurveyMonkey Apply,” Hector says.

With everything in one place, the application flow has also improved, allowing Hector and other staff members at the Center to monitor, review, and manage applications at ease without unnecessary manual work.

“I like that SurveyMonkey Apply is easy to understand and linear. One thing leads to another and it’s set up in a way that makes reasonable and logical sense,” Hector says. “As applications come in, I can look at them and pass them off easily. I can see applicants’ uploads to make sure they provide relevant work samples, and everything is easy to take in.”

By putting both programs online and prioritizing easy access, the AT&T Performing Arts Center has been able to grow their program reach significantly, helping more artists and fostering more excitement for the programs than ever.

We already have more applications than we did last year, and that’s because we’ve moved our application process online.

“Since we chose SurveyMonkey Apply I’ve also helped other organizations in the city choose the software that works best for them, and continued spreading knowledge of how grant management software can help.”

For Hector, working at the AT&T Performing Arts Center allows him to give the experience of art back to community members who may not have had a creative upbringing; something he values deeply.

“Being exposed to the arts early on and coming from a family that would sit around the piano and play all kinds of music just for fun was the way I grew up, and I can’t imagine children who grow up without music and theatre,” Hector says.

“The great thing is that there are so many creative, artistic people who are putting their talents out there for the community; touching lives, changing hearts and minds, uplifting the soul. It’s amazing, and I’m really gratified to be a part of that.

Sometimes I look around and think, thank you God for letting me work here. It helps me understand that I have been given the privilege to be in a position where I can change lives through the arts and arts education.

Ready to streamline your process?