Why curiosity matters in grantmaking

Everyone is talking about curiosity. It’s even being touted as the new business advantage, with top executives everywhere searching for ways to hire for and power curiosity in future and existing members of their organization.

With 73% of people reporting that feeling curious at work has lead them to generate and share new ideas, curiosity is more than just a buzzword — it’s a vital component to an organization’s performance. Think about it, every breakthrough discovery, invention, and new idea was the result of curiosity!

But how does curiosity play a part in grantmaking?

Our very own Content Marketing Manager, Nichole Vine, and resident Research Scientist, Erin Pinkus, explored the topic at this year’s PEAK Grantmaking conference in Denver, Colorado. If you couldn’t make it to PEAK this year don’t worry, we’ve summarized some key findings for you and will discuss what you can do to power curiosity in your mission and workplace.

The current state of curiosity

While new research has shown that curious employees are not only among the most engaged and have a broader effect in cultivating positive workplace cultures, only 45% of Americans in a recent SurveyMonkey survey believe that curiosity is valued in society. 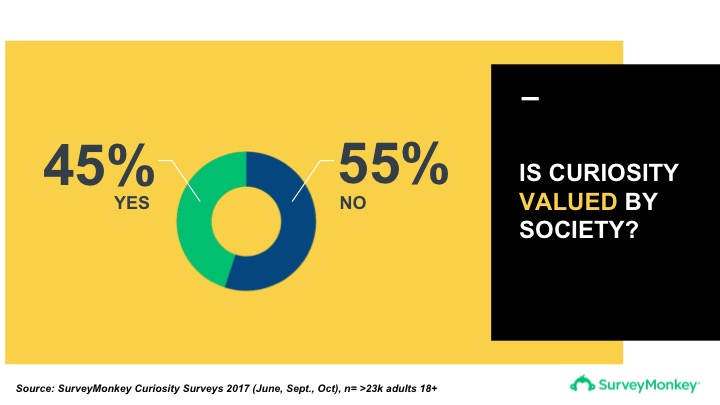 In fact, through a series of surveys reaching over 16,000 employed adults, our research team found that when asking which characteristics were among the most important for employees to have if the company were to prepare for the future; curiosity came in last, with only 5% believing its importance.

So what is it about curiosity that isn’t making an impact? If we know curiosity pays off, why do so many people deprioritize being curious?

Research shows this could be due to a perceived (or an actual) lack of encouragement and reward associated with being curious among different levels of organizations. While 83% of top execs believe that curiosity is encouraged at their company, only 52% of individual contributors agree. Even more significant, 49% of executives say that the more curious a person is at their company, the more money they earn, meanwhile only 16% of individual contributors see a connection between the two. 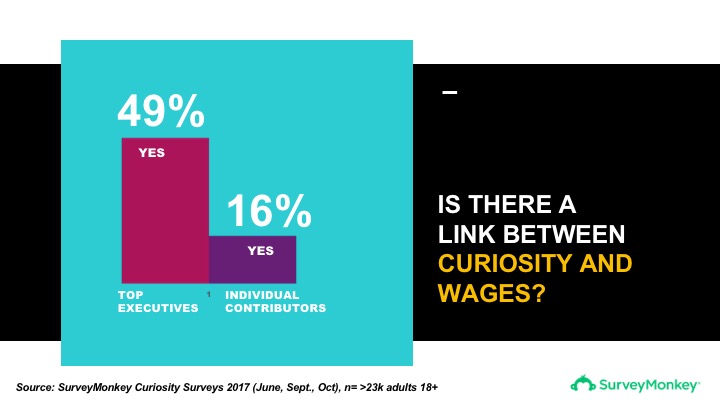 To get a pulse on curiosity in the grantmaking space, we surveyed over 200 grantmakers that serve a variety of areas such as education, community development, healthcare, and more.

The result? Grantmakers, with 83% reporting to be “extremely” or “very curious”, make up a margin of 13 percentage points more curious people than other Americans (70%)! In a space where traditionally, you try to do more with less, having a curious team is a fantastic asset in moving the needle on your mission.

A defining question for any grantmaker is: what makes for a successful grant application? We wanted to see how curiosity stacked up, so we asked.

“If you were writing a grant application, what would be most likely to make your application successful?”. 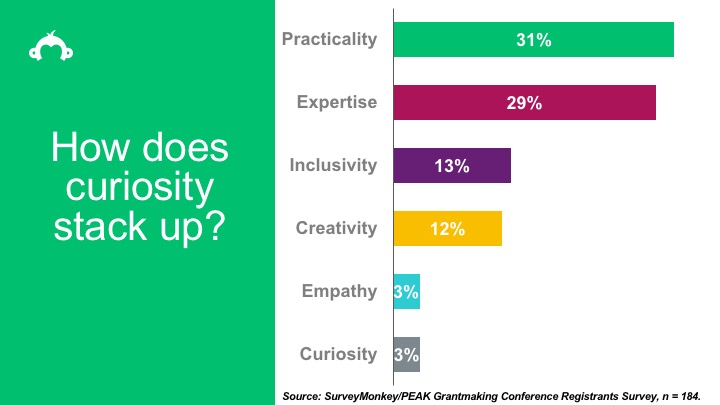 Although grantmakers are a curious bunch, curiosity doesn’t come out on top as a priority when creating or assessing a successful grant application. Practicality and expertise topped the list at 31% and 29% respectively, but something you may not have expected was that curiosity came in last at only 3%, tied with empathy!

While exercising curiosity at work has been proven to result in generating and sharing new ideas, only 66% of those in the grantmaking space say curiosity is encouraged at their work and only 12% say it is rewarded. Despite a whopping 94% of grantmakers agreeing that curiosity is key to their organization’s mission, the gap between the idea and practice is still significant. 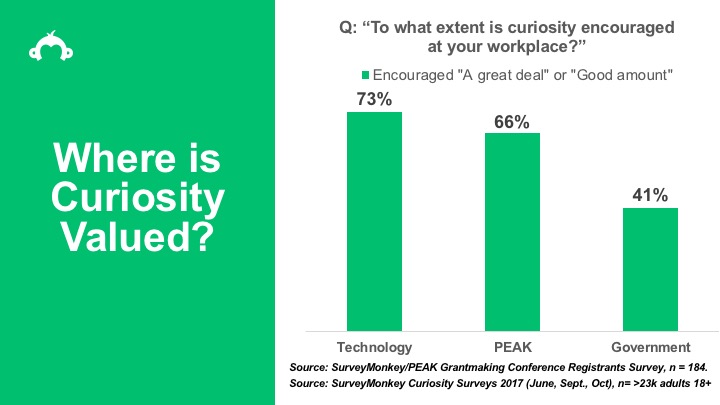 Acknowledging curiosity as a challenge in grantmaking, we were also curious to understand some of the more traditional challenges. Respondents provided several open-ended responses about the challenges they face, from crafting an equitable process to working with a closed-minded board, and yet the biggest challenge that almost 50% of grantmakers face is measuring a grant’s success. 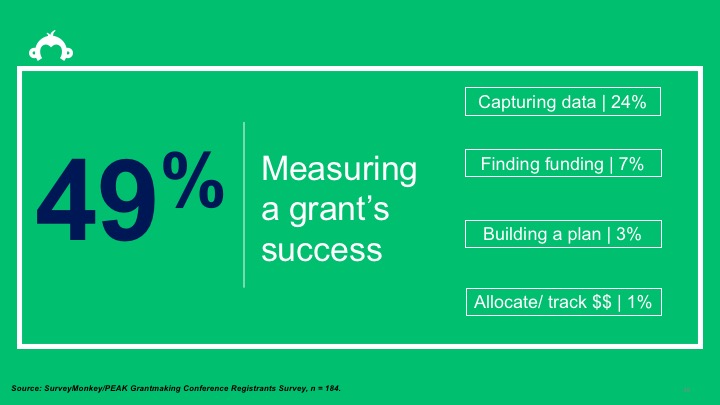 One organization pushing the boundaries of curiosity today is top-ranked hospital and New Hampshire’s only non-profit academic health system, Dartmouth-Hitchcock. Their accreditation program allows doctors, nurses, and medical professionals to attend conferences, knowledge sharing events, and take courses to expand their medical knowledge, and maintain their licensure. Their accreditation program turns new opportunities into reality, and connects medical professionals to share and generate ideas together to better serve our public.

Power your own curious

“One of the biggest issues we are facing with curiosity in the workplace according to our data is, how it is valued in theory but deprioritized in practice”, says Pinkus. Since most grantmakers say they are already highly curious, remember to celebrate curiosity as part of your identity, strive to practice it in your work, and challenge yourself to support that in others, too. Pinkus adds, “Help narrow the perception gap by encouraging conversation and curiosity at all levels of your mission and organization”. Promote question-asking, new ideas, and achievements from coworkers, reviewers, and even applicants!

Try asking open-ended questions on your applications or enable commenting from reviewers to prompt new ideas and diversity of thought. Finally, be open and transparent when answering questions and reward curious individuals however you can to foster a culture of curiosity and tackle your organization’s challenges together.

Fill in the form below and share how you manage your application and review process, or watch the Why curiosity matters in grantmaking webinar!

Want to learn how SurveyMonkey Apply can help your organization? Interested in seeing a demo? Fill out the form below and we'll get in touch!